Gospel music artist, Adaora is an inspirational singer and songwriter who is originally from Nigeria. With several music projects released since she started as an artist, the US based praise/worship leader has build a formidable network of audiences through her music. In 2016, she released her EP titled “Nothing Can Hold Me Down” which included several amazing songs that are still being sung till today.

This year, Adaora is stepping out with the release of brand new songs, one of which is “I Come (Remix)”. It is a song that will absolutely bless your heart.

“While I was yet a sinner, he loved me first and continues to love me everyday, lavishly. I wanted to take some time to love him back through this song. I can’t wait for you to hear these conversations with my father. “I COME REMIX” was produced by Peter Tobe and it was an honour to work with this amazing producer.” – Adaora shares about her new single.

Her music style resonates across various cultures and ethnicity. She has released two musical compilation projects, the debut album- “For His Worship” that lunched her music career and an EP titled “Nothing Can Hold me Down” released in 2016. Through her music, Adaora has built a formidable network of diverse audiences and has appeared in programs on major TV networks. Adaora is also a seasoned professional, serving in the Air Force. With a PhD in medicinal chemistry, she currently works to improve Army medical programs. Adaora is a praise/worship leader and Young Adults and Singles Ministry (YASM) adviser at Mercy Seat Chapel. She is married to Anosike Nwokoye and they have two beautiful children. 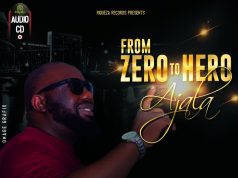