Patrick C. joins in celebrating Jesus the risen King with this lovely song ”You are Good”.

‘You Are Good’ is his sophomore solo studio recording since after his debut release ‘New Name’ in 2016.

Speaking about his inspiration, He said;

“In all circumstances, Our GOD is good. HE deserves our thanks, praise and worship, irrespective of the situation we find ourselves. All things work together for good to those who love GOD, to those who are the called, according to HIS purpose (Romans 8:28). ”

Patrick Chinedu Ojide, a.k.a Patrick C is a Nigerian gospel singer and a songwriter who hails from Nnokwa in Anambra State.

His interest in music became noticeable at the age of six years and he started his musical career in Assemblies of God Church as a Choir leader in Children’s department after which he served in the adult Choir in the same church. Patrick is skilled at playing musical instruments of which his favourite is the keyboards.

He has ministered and collaborated with many notable gospel music ministers such as Samsong, Victor Ike and lots more. His goal is to win souls for Christ through his music ministration. 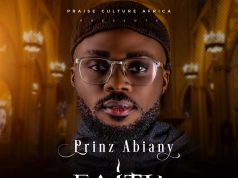