Warri-based Pastor Ovie Onini & Purebreed has released their debut album project, The OutCry, now on all digital streaming platforms. The full-length album is coming just after a single ‘Invade Me’ off the project was released earlier in October 2021.

The thirteen-track album embodies great sounds enforcing the mind of God for mankind and building intimacy and the move of the spirit. The OutCry was recorded live in Warri.

Born and raised in the heart of Warri, Delta State, Nigeria amongst the many decadence and juvenile delinquencies, Ovie Onini recognized the call of God early upon Him and dedicated himself to it by God’s grace.

Pastor Ovie Onini is the lead pastor at The Glory Dawn Christian Center In Warri, with a vision to raise people who will Unleash the Light of Christ and His Kingdom at all cost, at all times, and in all spheres of influence.
Ovie Onini The OutCry
He is joyously married to Ovuoke Onini and they are blessed with two wonderful sons, Igbunu and Otaroghene. 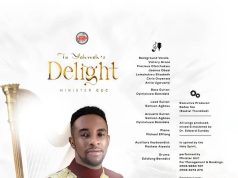