Hillsong United hit up with a brand new one entitled “Another In The Fire,” the 4th single off their upcoming new project recorded live at Hillsong Worship & Creative Conference in Sydney, Australia. Written by Chris Davenport & Joel Houston, the new song assures us of God’s presence in any situation.

As fans get ready for the release of the album “People”, UNITED prepares for “The People Tour”, which will cover the United States starting in April.

At the end of 2018 Hillsong United released their first single from the new album, “Good Grace” and so far in 2019, the Australian worship team has released “Whole Heart (Hold Me Now)” and “As You Find Me”. 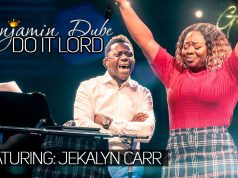 Top Song Of The

Don Moen Teamed Up With Loyiso Bala And Drops “It Is...